Art Matters Reflections on the definition of "art"

My last (and first) column was a reflection on the column’s name “Art Matters.”  In part, it spoke to my immersion in the art world and its influence on me personally; in part, it was an exploration of arts importance on a broader level.  I thought it would be interesting to look at a dictionary definition of art. What follows is adapted from the “Oxford Advanced Learner’s Dictionary” online.  For a thorough understanding of any word, go there or the Oxford Annotated.

Did you know that art can be either a noun or a verb.  As a noun, its primary meaning is ‘the use of the imagination to produce works typically in a visual form, such as painting, drawing or sculpture and to be appreciated primarily for their beauty or emotional power (1). It can also refer to the actual works produced by the act of creative expression (2) or the act or skill by which those works are created (3).  The “arts” can refer to visual art, music, theatre, literature, etc. when you think of them as a group (4) or a particular type of art, i.e., dance or painting (5).  And art can be used in the sense of the humanities or “liberal” arts” which refers to areas of study other than the sciences (6) or of an ability or skill that can be developed by practice and training, i.e., the art of …writing poetry or even making tea (7).  As a verb, “art” is an archaic form of the verb “to be”, second person, singular, the “thou art” of the King James Bible.

Does that mean that to do art is to be human?  An interesting thought to explore.  I recently created and sold an abstract painting called “Neolithic Rider.”  My dad bought it which was a flattering and fulfilling turn of the circle back to where I began as the child fascinated by his art, now he in his 90’s appreciates mine.  As for the title, the painting started as an abstract and then struck by its similarity to a horse & rider, I tweaked it just enough to make the pareidolic image clearly visible (picked that term up in a triva question recently, it means the tendency to perceive a specific, often meaningful, image in a random or ambiguous visual pattern). 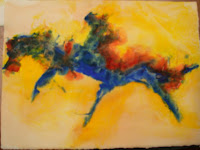 Part of the fun of doing art is being able to play with design and pattern. And to spin the wheel back to the opening sentence…the earliest humans created art and that form of expression was important enough to them to paint on cave walls, carve into bones or leave works in the earliest burials we’ve found.  Young children given a crayon or paint will create with earnest concentration and for them it’s about the act and the experience not about the result.  As they grow, their art changes.  Next, they do representational pictures, drawing iconic images of simple homes, stick figures and the like.  Study most early art up through the Late Medieval /Early Renaissance, it may become more sophisticated and realistic, but generally it is more often based on idealized images of  the subject matter whether its Egyptian pharaohs or Greek & Roman rulers or Byzantine Christ Pantocrator or Christ “All Powerful.”

More on Art 101 and its parallel in how our artistic sense develops next time.


You can contact her at jcornacch@aol.com
Posted by Carl Maratta Swap Meet at 11:21 AM No comments: